Guitars That Got Away

Is this 1956 Fender Stratocaster Australia's First?

After having bought my first Fender Stratocaster, the 1960 Fender Stratocaster in Candy Apple Red, I like many other collectors I knew, were on the hunt for a maple neck Strat because all we had ever seen up to this time in terms of vintage guitars, were all rosewood fingerboard guitars.

Several months after getting my Candy Strat, (in 1980) I was talking to my father (also a musician) about the value of these old guitars, and he mentioned the first Strat he had ever seen was owned by his cousin Charlie Wade, a Jazz/Hawaiian musician that worked the Australian club circuit very successfully in the 1950’s and who recorded over 70 records. I asked him what colour it was, and he said; “a brown sunburst”. I asked, “with any red in the sunburst?” He said; “no, just brown”.

At this point I got rather excited as I knew it was an early Strat, likely to be a 50s guitar. I said “Great Dad, what is his phone number?”. “No idea, I haven’t spoken to him for years” he said. It was at that point that I grabbed the phone book, and started looking for every C WADE in the phone book and rang every one of them. It was after failing miserably that my father tells me, “Oh, Charlie is what family call him, his first name is John, or Johnny” Once again I started calling every J WADE in the phone book. “Hi, is that Johnny Wade, the musician?” Eventually, I had successfully found the man in question living in Ashfield, an inner west suburb of Sydney.

After explaining to him who I was, he was very gracious and invited me down to see his guitars…yes guitars, he much more than just the old Fender. So I arranged a day to visit him, and brought a fellow collector along with me.  Upon arrival and after seeing all his other treasures, we asked about the Strat. He told us it was down the back in the garage.

He opened up his garage door, and at the other end was a workbench, piled high with boxes full of sheet music. “It is underneath all the boxes” he said. So we spent the next five minutes removing all the boxes until we saw a vintage tweed case, which we had not seen before either. We grabbed the slightly crushed case and put it on the floor of the garage. We both looked at each other curiously because it was a case long enough to fit a Precision bass in. We took a deep breath and opened the case. There it was, the first maple neck 50s Stratocaster we had ever seen, a 1956 Fender Stratocaster to be exact.

Thankfully, the guitar was not crushed like the case was from the weight of the boxes of sheet music. From what we could tell, this 1956 Fender Stratocaster was 100% original. Clearly, this was a players guitar as it had a fair amount of wear on both the neck and the body, as seen above. He mentioned the missing paint on the top horn of the body, and said he was going to get a friend to ‘French Polish’ it. We almost screamed at him not to do that. He then went on to explain how the paint got chipped off in the first place.

Johnny Wade had a residency at the Brighton Hotel in Brighton Le Sands in Sydney. He used to leave the guitar in the managers office after each show, just leaning it against a wall next to the safe. Each day as the manager opened the safe to secure the days takings, the door would swing open and hit the top horn of the this 1956 Fender Stratocaster. It is a cool story, but an even cooler story is how he managed to get the guitar in the first place considering Fender guitars were not brought into Australia until the 1960s.

In the mid 1950s Johnny Wade was playing a matched set Gibson Les Paul Goldtop and a Gibson GA-40 tube amplifier (I also purchased this amp from him later). Johnny did not like the way the Les Paul dug into his ribs, so he asked a fellow musician working the cruise ships between Sydney and Los Angeles to pick him up a new Stratocaster on his next visit, which is exactly what he did. My theory is that this musician was a bass player, and brought the Strat into Australia in a bass case so he could claim it was his own, avoiding any import duty or taxes. We will never really know. 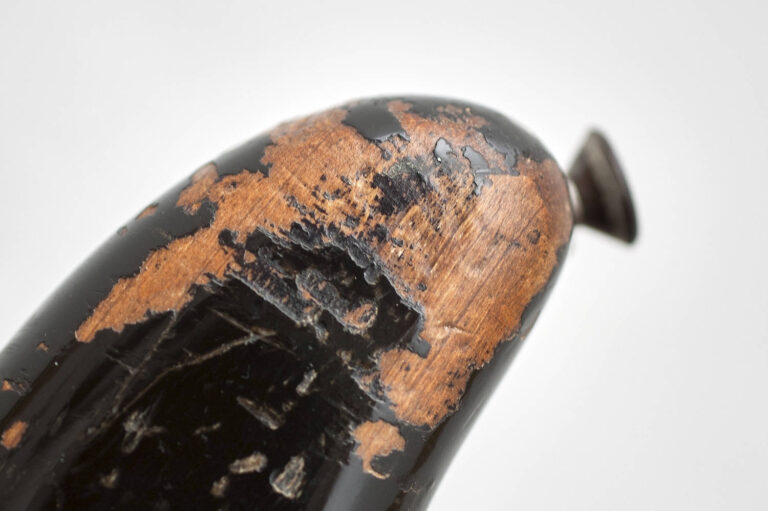 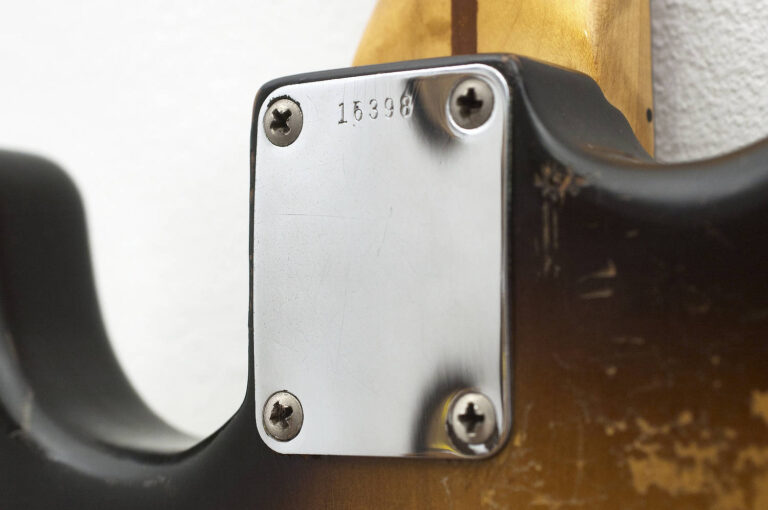 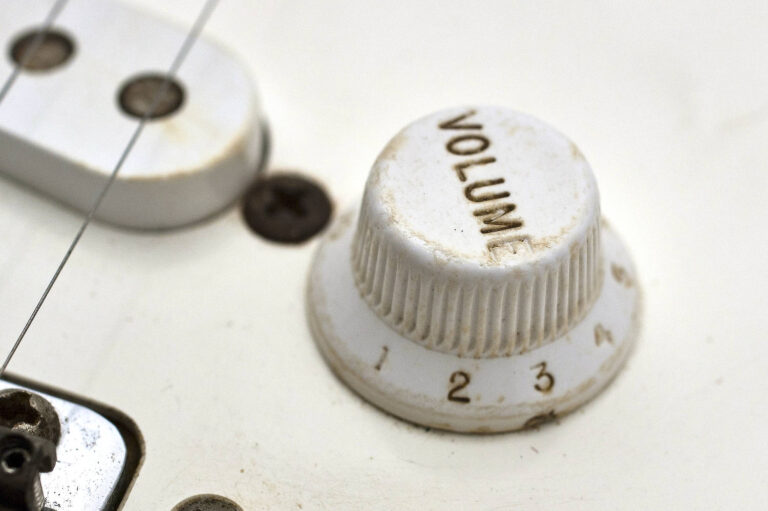 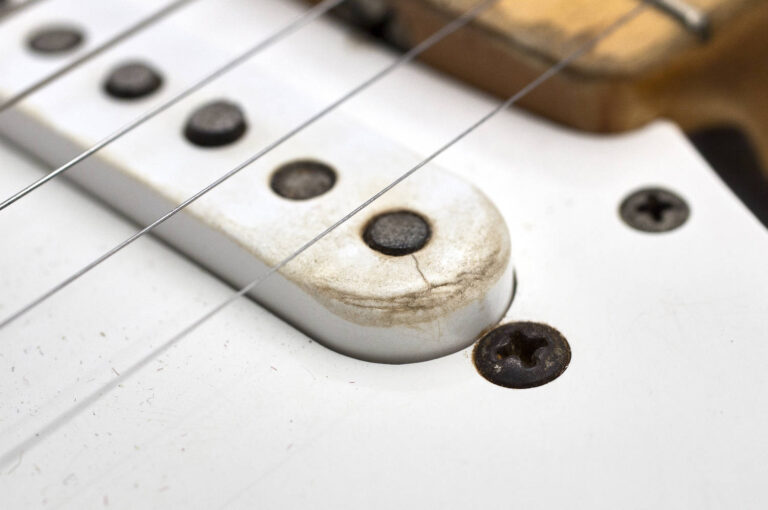 Looking at the guitar in detail, it has all the hallmarks of a 1956 Fender Stratocaster; a V shaped neck, and the Bakelite pickup covers and volume/tone controls. As you can see from the images above, they were rather worn which shows you just how many shows this guitar had done in it’s life with Johnny Wade.  He clearly wore a belt buckle too, as there is a very prominent patch of worn paint on the rear, just below the tremolo spring chamber.

The neck which was dated XA-7-56 which is certainly correct for the guitar, and the neck, like the body shows significant signs of wear along the entire length of the fretboard. (Some of this was done by later players, myself included) Johnny Wade was a really gifted guitar player, in that very old school jazz style, and he worked that neck all night long at every show. At the same time, he must have had a light touch, because although the frets showed signs of wear, it was not enough to warrant a re-fret. 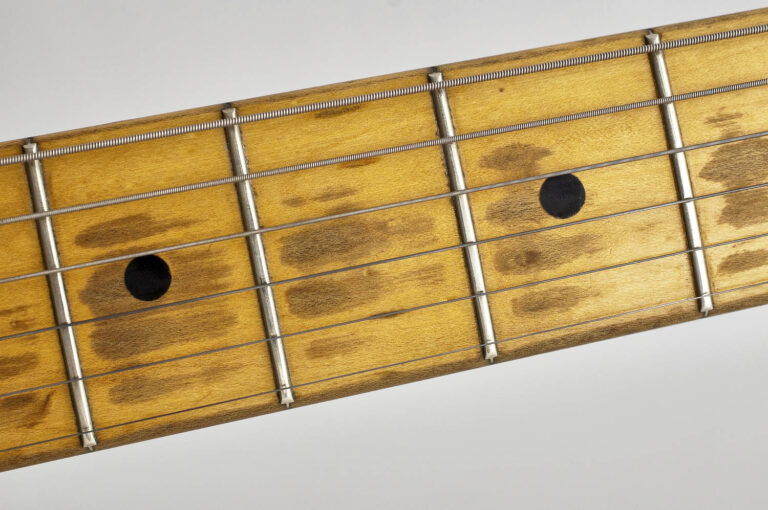 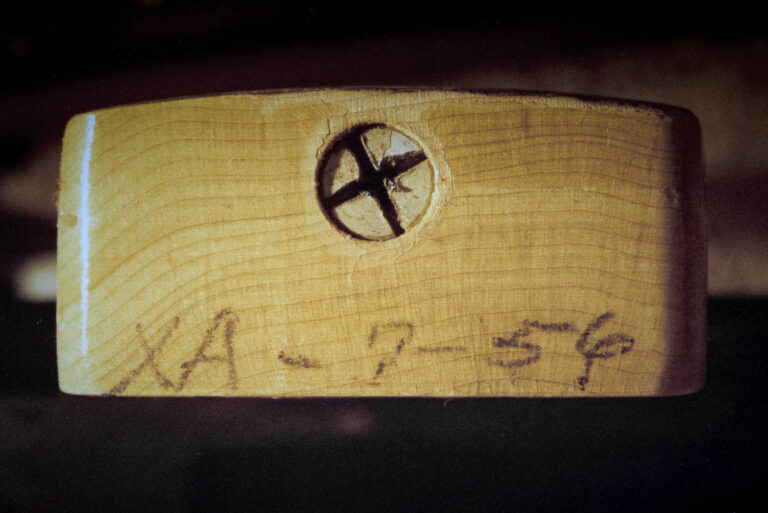 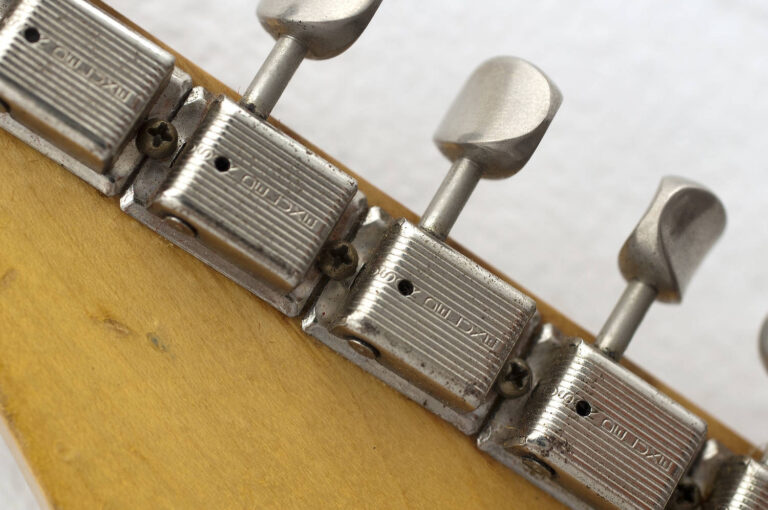 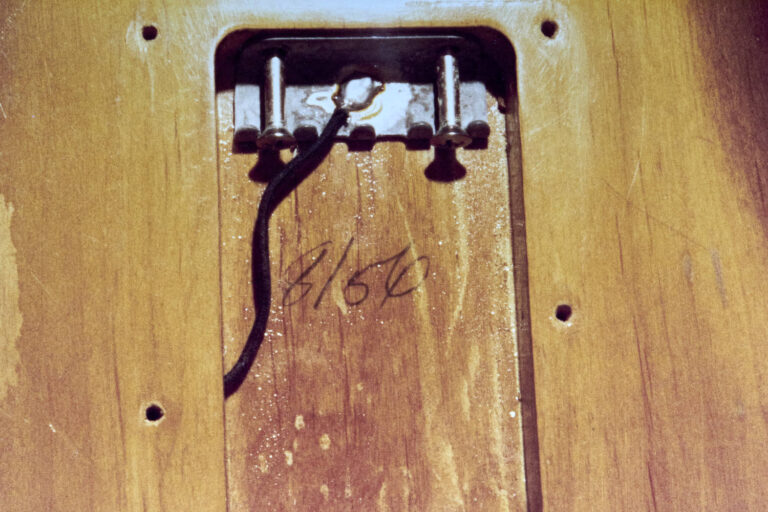 One of the curiosities of this particular 1956 Fender Stratocaster, apart from the fact it was in a bass case, was the fact that one of the single line Kluson tuners was in fact a two line Kluson. We asked Johnny Wade about this having been replaced at some point, and he swore it had not, “that is how the guitar came”, he said. We knew that was not possible as the two line Kluson tuners were not even made at that time. We put it down to his memory being poor at this stage in his life.

I played this guitar in my band of the time Peculiar Clerk, in clubs all over Sydney. I used to take this guitar as my backup, and my main guitar was a 1963 Fender Stratocaster, white with a tortoise shell guard which sounded fatter through my 1964 Fender Bandmaster amplifier. It was my main guitar when I first got it to be fair, and at some point I stupidly replaced the nut and string tree with carbon counterparts, and even replaced the bridge saddles with roller saddles! What the hell was I thinking? It was the 1980s however, and that is my excuse. I eventually put the original parts back on the guitar.

After a few years the same guitar collector that came with me to uncover this guitar (who now had a vintage guitar store) approached me with a customer who was interested in buying the guitar. Although the guitar was valued at AUD$3,500-$5,000 at the time, I bought it off Johnny Wade for only AUD$1,500. The interested party came to see the guitar and was very keen to buy it. My asking price by now was AUD$6,500.

The interested party said; “That is a lot of money for a guitar”. To which I replied; “It’s a stupid amount of money for a guitar, but if you want it, that is the price”. At that point, he handed me AUD$6,500 in cash, and took the guitar away. I was somewhat shell shocked because I did not really want to sell it, but the cash at that time in my life had great appeal. 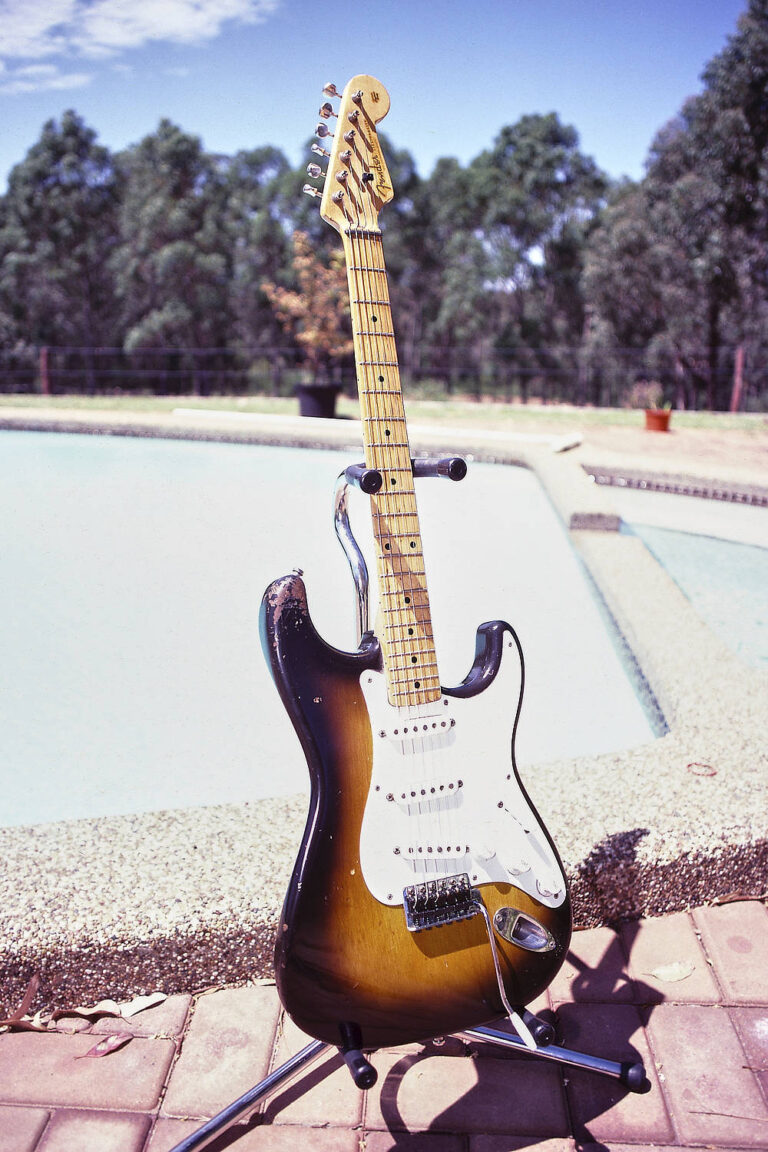 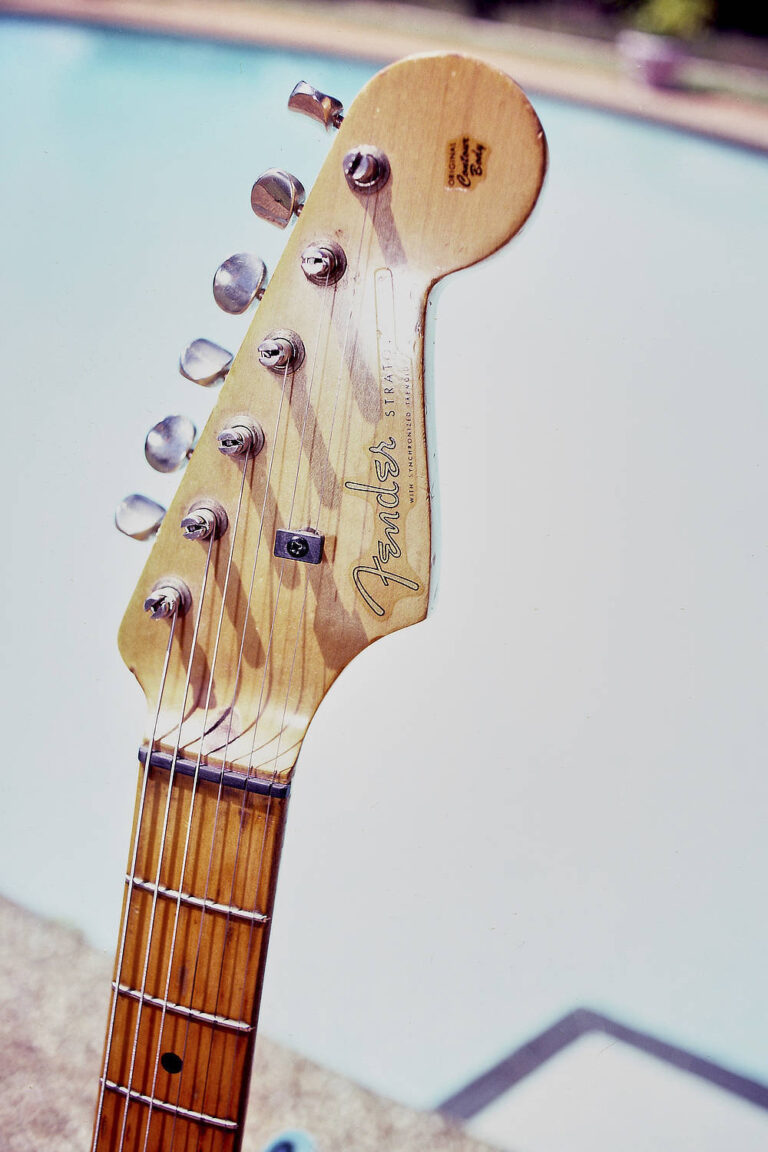 These images show the 1956 Fender Stratocaster pool side, fairly early in it’s life with me, when I stupidly added a carbon nut and string tree, as well as roller bearings on the bridge saddles. You can see that the fretboard lacquer is not as worn as other images on this page which were shot many years later after Midnight Oils’ Martin Rotsey owned the guitar.

The guitar stayed with the buyer for some years before it was sold to Martin Rotsey of Midnight Oil. Martin kept the guitar for many years, and it is my understanding it was used on many Midnight Oil albums. At some point in 1997 Martin Rotsey offloaded the guitar in a trade at the same Sydney vintage guitar dealer, yes the same guy who was with me when I first discovered the guitar. I was just returning from living overseas as this was going down and because I had done this dealer a favour, he offered the guitar to me for what he had traded it in for, not for what it was for sale for, which was AUD$30,000. So, I bought the guitar back, for AUD$17,500.

I sat on the guitar for a few years, but as I was no longer playing in bands and had a career to focus on, I decided that these guitars will not go up in value anymore, I should offload it now, while it is still worth AUD$30,000. So, I sold it through that same dealer who sold it to me, for around $30,000 plus I picked a nice newer model Stratocaster off the shelf so I had something to play should the need arise. Once again, I let this guitar go! A few years after this of course, the vintage guitar market just went through the roof thanks to Guitar Center in the USA buying up all the stock after floating on the stock market.

It was during this absolute boom that this guitar made another appearance at the same guitar dealer, only this time, the price tag was AUD$125,000! Why did I not just hang on to it the first time? The guitar eventually sold, not sure if they got the full asking price, but I have not seen it since that time. It is an amazing guitar with a very rich history and it has made some amazing music during it’s lifetime, I am just glad to have been a part of it’s life.